When you take a look at the memblock allocation API for the first time, you might feel a bit overwhelmed. You see a bunch of functions with “memblock_alloc” or “memblock_phys_alloc” prefixes, coupled together with all possible combinations of start/end addresses and NUMA node requirements that you can think of. But this is not a surprising view, given the fact that memblock has to accommodate the needs of ~20 different architectures, from Motorola 68000 through PowerPC to x86 and ARM.

It’s possible to look into the abyss of allocs and understand what are they about. As we will see later on, both groups of allocation functions, memblock_alloc* and memblock_phys_alloc*[1] use the same logic to find free memory block. Although this logic is a bit complicated, it makes sense and can be broken down into smaller, easy to digest, parts. After learning the way how it works, we can apply this knowledge to all functions. We would just need to remember what memory constraints we can ask for and where.

There’s a lot to take in, so we need to approach this topic with caution. Descending deep down into macros like __for_each_mem_range_rev straight away won’t teach us much about the flow of the allocation process. We have to be able to zoom in and out when needed. Because of this, I decided to break this analysis down into two parts. In the first one, I’d like to show you how memblock_alloc* and memblock_phys_alloc* functions converge and discuss the general flow of this common part. Once we understand how it works, we can move on to the second part. There, we’ll look at the implementation of the core allocation function and see what it does to grant memory at (almost) all costs. We’ll dissect its internal parts, delve into details, and get to see quite a lot of helper functions.

Let’s start our analysis with taking a look at two functions - memblock_alloc and memblock_phys_alloc_range. As you may recall from the introductory post on memblock[2], the first one represents the group of functions that return virtual addresses to the allocated memory regions, whereas the second one operates on physical addresses.

One of the most widely used boot time memory allocation functions. memblock_alloc is used across different architectures to allocate memory for:

A quick glance at its implementation reveals a quite short function – it’s a wrap for a call to memblock_alloc_try_nid:

The third and fourth parameter instruct memblock to use the whole address range covered by the entries of the memblock.memory array. memblock_alloc doesn’t care about which NUMA node will be used here. To signal this, NUMA_NO_NODE value is passed in.

Going one step deeper doesn’t reveal much of memblock_alloc inner workings. memblock_alloc_try_nid is yet another wrapper that calls memblock_alloc_internal and clears the memory pointed by ptr if one was allocated:

Maybe third time’s a charm? Well, memblock_alloc_internal turns out to be yet another wrapper. But it’s a more elaborated one:

You’ve might have expected to see memblock_phys_alloc discussed here. Its name contrasts well with memblock_alloc name, the function itself has a simple signature, and it looks convenient to use. It turns out that it’s the least popular function in the phys_alloc group. It’s not that interesting anyway, it’s just a wrapper for memblock_phys_alloc_range:

Actually, this one is the most widely used when working with physical addresses. memblock_phys_alloc_range function is used to allocate memory for:

As you can see, x86 makes an extensive use of memblock_phys_alloc* functions. Interestingly enough, the word has it that this family of functions is getting deprecated (source).

Coming back to our function, this is how memblock_phys_alloc_range looks like:

To sum this up in a visual way, the call chains we’ve followed here can be seen this way: 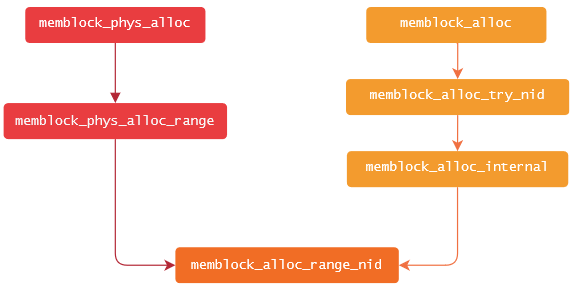 The same pattern emerges for other allocation functions like memblock_phys_alloc_try_nid or memblock_alloc_low. It turns out that memblock_alloc_range_nid is called, both directly and indirectly, by a group of functions, where some of them do additional checks or clean-ups. You don’t need to take my word for it – feel free to take a look at the memblock source code to convince yourself that this is the case.

Now, we can agree that all roads lead to memblock_alloc_range_nid. One more thing you need to know about it is that this function is very determined to grant memory. It is ready to drop memory requirements passed by the programmer and retry multiple times to allocate memory before giving up.

So, what does the general flow of this function look like? In essence, memblock_alloc_range_nid does two things – it first looks for an available memory region , and then tries to reserve it. Searching for a free memory block is broken down into a multiple helpers and macros, each of them implemented for both memory allocation directions – top-down and bottom-up. The former starts allocating from high addresses (that is, from the end of the memory), whereas the latter looks at the low addresses first. Although bottom up feels more intuitive to think about, most architecture use the top-down direction.

Finding an available memory spot is aided by a low-level helper, which returns the base address of the region on success. If everything goes well, memblock_alloc_range_nid reserves a region and a new entry in memblock.reserved is created. If not, the function checks if it can loosen up the memory requirements, like a preference for a specific NUMA node, and tries to allocate memory again. This approach works in most cases, so a free region is found and reserved on the next attempt. If we’re out of luck, no memory gets allocated, and the function returns 0 address to indicate the failure. This process can be pictured as the following:

That’s it for the high-level tour of memblock allocs. Now, you can see how all the functions we thought were doing different things are actually pretty close to one another. We also discussed the flow of the core allocation function, memblock_alloc_range_nid, but many questions remain unanswered. What exact memory constraints can be scrapped when memblock retries allocation? How are memory regions iterated in the top-down direction? Or do we care about memory mirroring at all? To answer these, we have to take a close look at the implementation of memblock_alloc_range_nid and analyse what bits it uses down the way. As it’s a lot of work, let’s save it for the part 2 of our investigation.