Less than five seconds – that’s how long you need to wait to get your Linux kernel up and running. But it’s hardly an idle time for Linux – the system has to process configuration, perform architecture-specific setups and initialize many subsystems.

One of such subsystems is memory allocation. In order to prepare it, the kernel needs to have an allocated chunk of memory. But how can we manage memory if we have no memory allocator? We have a chicken and egg situation, but there’s a solution – use a structure that is initialized at build time called memblock. It’s a specialized mechanism that allows Linux to manage memory regions during the early boot phase, before the usual memory allocators are initialized in mm_init().

There are many features offered by memblock:

The memory is modelled as a collection of blocks that are either free or allocated. They are stored in the main structure called memblock as two memblock_type members: memory and reserved. It is also possible to define a collection of memory regions that ignores all the flags and shows the whole available physical memory – physmem. This structure is initialized if CONFIG_HAVE_MEMBLOCK_PHYS_MAP flag is defined. It is a pretty small array – it can store only 4 entries. In addition to this, the memblock structure keeps information on the allocation direction bottom_up and physical address of the current memory allocation limit current_limit: 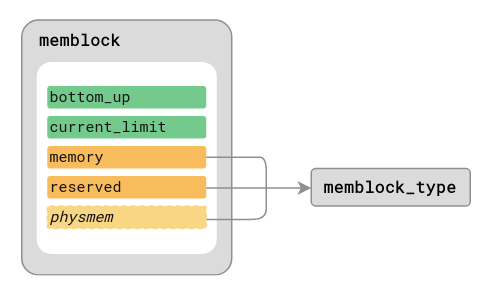 In the memblock world, chunks of memory visible to the kernel are called regions. A collection of memblock_regions is wrapped by the memblock_type structure. regions is a static array that can store 128 entries that can be resized if needed. Other information available in this structure is the combined size of the regions total_size, symbolic name set during initialization name and the number of memory blocks it currently stores cnt: 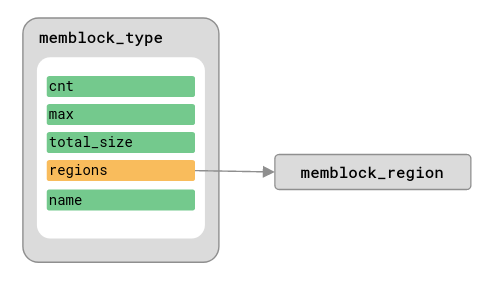 The already mentioned structure, memory_region, is another wrapper that has all the information about memory region – the base physical address base, size of the region size, region attributes flags and, if NUMA nodes are used, a node ID nid: 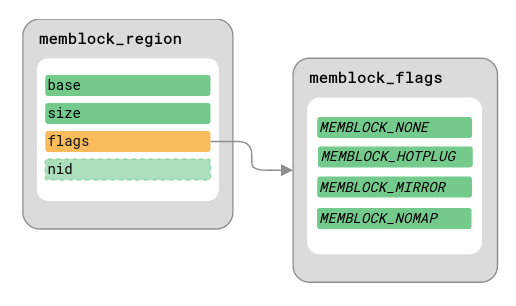 The region attributes are used to mark if a memory block should be treated in a particular way or not. The available flags are:

So, the general memblock structure can be visualized like this:

Memblock is initialized at the build time as a memblock global variable with the following values:

__initdata_memblock is a macro that, depending on CONFIG_ARCH_KEEP_MEMBLOCK and CONFIG_MEMORY_HOTPLUG flags, embeds (or not [1]) the memblock structure in an appropriate data section. As a statically initialized structure, memblock is available since the very beginning, together with the region arrays, which are initialized as following:

The number of available and reserved regions is defined by these macros:

If we were to take a look at the disassembled Linux image vmlinuz that discards memblock after boot time and has memory hotplugging enabled, we can see an initialized memblock structure in .meminit.data section: 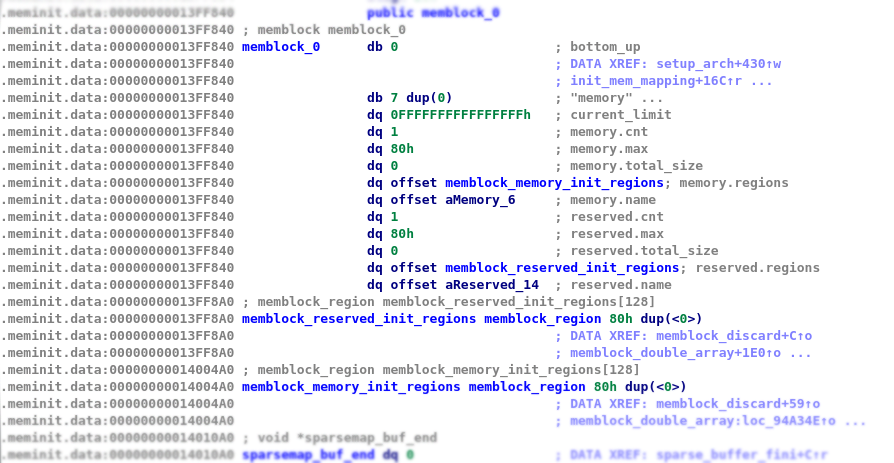 Let’s say you’ve taken a heroic effort to add Linux support for a new architecture, and now you need to implement your own version of setup_arch(). There are many, many things you need to take care of, one of them being memory initialization. You might want to hide some areas of the memory that contain kernel, boot parameters or RAM disk image. Or maybe you wish to allocate some memory for logging purposes.

Whatever action you want to take, memblock can help you with a myriad of functions it offers. We can split them into four groups:

The basic features of memblock revolve around managing memory regions. Given you have a start address (base) of an area you wish to manage and its size (size), you can: mark it as reserved (or not), register it, so the kernel knows about its existence or simply remove it. The functions that make it possible are:

Memory allocation is the core functionality of memblock. It allows you to request a chunk of memory and specify its various parameters: size, alignment, start and end addresses and NUMA node’s ID. The memory allocation functions prioritize granting memory over satisfying the constraints specified by a programmer. For example, if we want to allocate a range of addresses in a specific NUMA node, which is unavailable at the time, memblock will try to allocate memory in a different node within the provided range. If it still doesn’t work, it’ll drop the lower memory limit and return the address to the allocated memory.

The first family of functions consists of:

Note that the memory allocated by these functions is not cleared, and it’s on the programmer to take care of clearing it if needed.

The second group is centred around the memblock_alloc_try_nid function that tries to allocate a block of memory given its size, alignment on a specific NUMA node within the requested range. As it requires a lot of parameters to control, so it’s usually preferred to use one of these functions:

The memory allocated by these methods is cleared and ready to use.

As mentioned before, memblock_alloc_try_nid only tries to meet the criteria, which means that if it can’t allocate memory in a specified NUMA node, it will find it somewhere else at all costs. If a programmer wishes to force memblock to grant memory only from an exact node, they should use memblock_alloc_exact_nid_raw, which returns NULL on failure. The _raw suffix is used to describe functions that don’t clear memory, similarly to these returning physical addresses.

This is the biggest group that includes functions that change the memblock parameters (e.g., memory limits), query about the memory state, check how much memory is available and many more. Some of the most popular helpers are:

For the complete list of helpers, and some internal functions, see memblock.c file, lines 1634 – 1928.

Once the usual memory allocators are up and running, there’s no much work left for memblock. The last thing it has to do is to release memory to the page allocator. In order to do so, start_kernel calls mm_init, which calls memblock_free_all function down the line. This function traverses the whole memory and frees reserved regions, so they can be used in the “normal” memory allocation.

The memblock structures, like many other boot-time specific structures, stay in the memory until the system initialization finishes. To clean them up, start_kernel calls arch_call_rest_init, which, among other things, frees the memory occupied by the boot configuration and mentioned structures. Freeing memblock is achieved by calling memblock_discard function in page_alloc_init_late. Still, some architectures, like ARM64 or PowerPC, decide to keep memblock after early boot [2]. To override the default behaviour, they set CONFIG_ARCH_KEEP_MEMBLOCK flag to true, so the memblock_discard call doesn’t do anything and the memblock private memory stays intact.

Memblock is a mechanism that performs memory management in the early stages of the kernel initialization. The memory here is seen as a collection of regions that are either available to kernel or already allocated. As it could be seen here, memblock gives a lot of flexibility to the programmer. You can manage regions’ visibility to the kernel, reserve memory areas and fine-tune specific parameters like the start/end addresses or even NUMA node’s ID when allocating memory. Thanks to the wealth of functions available, the boot time memory management is convenient and fairly accessible.

Little was said about what’s going on behind the scenes of memblock_alloc functions. That’s something we can look into next time!

The style of diagrams used in this blog post is heavily inspired by the Sourcetrail code visualization tool. I used IDA Free to disassemble the Linux image.